Tassos Lambrou (aka Tassos Bouzouki) is a Live Greek Music Specialist and a Bouzouki Teacher who has a diverse appreciation of all Greek musical styles.

The musical talents of TASSOS BOUZOUKI are well known to Sydney’s Greek Community who have been applauding his performances for close to three decades at numerous private functions and at venues such as The Cyprus Club, The Lemnos Club, The Greek Community Club, Megisti Blu and ΝΟΤΕΣ LIVE.

Now aged 38, Tassos Bouzouki is always in high demand to perform at various private functions such as Weddings, Engagements, Birthdays, Christenings and Greek Taverna Nights. He also has a lot of experience with performing at major Events, backing up artists from Greece and Cyprus and providing all aspects of Entertainment for private functions.

It is obvious that Tassos Bouzouki (the son of George and Helen Lambrou (from LEMNOS and CYPRUS respectively) has inherited his musical talent from his father’s family. His late grandfather Anastasios (Tassos) used to play the clarinet in LEMNOS and also in Sydney, while his father George plays the accordion and keyboard.

Tassos began learning the bouzouki when he was just eight years old. His teacher for the ensuing eighteen months was the virtuoso bouzouki player Chris Olympios (aka Christaki) who made a musical career in Greece accompanying artists such as Anna Vissi, Kaiti Garbi, Despina Vandi, Paschalis Terzis and Antypas. “Christaki taught me the correct bouzouki technique and fundamentals and prepared me well with additional learning material when he left for Greece. I practised every single day as advised by my teacher and father in order to excel,” said Tassos, who added that from the age of nine he was playing and doing Floor Shows at Greek dances, weddings and other functions with the band “Μοριάς” in which his father George was a part of, as a keyboard player and singer.

At just 11 years of age, he took over the lead role as bouzouki player in his father’s band and performed his first full night, having an extensive repertoire, at a Greek New Year’s Eve event in Newcastle during 1991/1992. From 12 years old and between 1992-1996 Tassos was invited with his father to join the popular band “Ρούμελη” where he would meet and make long standing relationships with fellow musicians here.

Tassos Bouzouki studied 3-Unit Music for his Higher School Certificate in Sydney and achieved 100% in both the assessment and examination components. Having excelled in his HSC Music subject, Tassos was one of twenty talented musicians (and the first Greek bouzouki player ever) to have been selected by the New South Wales Board of Studies to perform at the Sydney Opera House Concert Hall as part of ENCORE 97. Here he was chosen to perform one of his six masterpieces he played for his HSC, namely BOUZOUKI AND WHISKEY (ΜΠΟΥΖΟΥΚΙ ΚΑΙ ΟΥΙΣΚΙ), an instrumental solo by one of the Greatest bouzouki players and composers of all time GIANNIS STAMATIOU (aka SPOROS).

However, with a TER of 90 and having received full marks in 3-Unit Music for his HSC in 1997, Tassos enrolled in a Bachelor of Business degree at UTS, as the Sydney Conservatorium of Music did not accept any ethnic instruments (including Bouzouki) to study a Bachelor of Music. Tassos completed his degree and graduated with credit in 2001, majoring in Accounting. It is interesting to note that on completion of his degree at the end of 2000, he was invited to record the bouzouki and vocal parts to a song that would become extremely popular amongst all Greek DJs and Greek Club events at the time. The song was titled “ΠΟΙΑ ΕΙΣΑΙ ΕΣΥ” and was played with such success across all leading Greek Night Clubs and even radio stations at the time, with most people being unaware it was TASSOS LAMBROU who was playing Bouzouki and Singing on this recording.

Tassos’ parents were so proud of his achievements (both musically and academically) that they invited him to go on holidays with them to Greece and Cyprus just after his university graduation ceremony in April 2001.

Tassos came to fall in love with both Greece and Cyprus, especially the parts his father and mother were born in (PLATI in LEMNOS and ANGLISIDES in LARNACA) where he spent of his time in. His extraordinary bouzouki playing and singing was echoed at various weddings, bouzoukia and panagiria he was invited to perform at while on holidays. Tassos even had the golden opportunity of a lifetime to play for Notis Sfakianakis whilst visiting family friends in Kos. After hearing Tassos play bouzouki, Notis Sfakianakis asked Tassos for his contact details as he wanted to refer him to his Maestro, who at the time was Antonis Gounaris.

In returning from his overseas trip in September 2001, Tassos found inspiration to work on his own  recordings and compositions. In 2002, he released his debut CD Single with his own original music and lyrics titled “ΘΕΛΩ ΝΑ ΣΕ ΞΑΝΑΔΩ”.

Tassos’ first club gig was the Sydney Olympic Sporting Club as a 16 year old in 1996. On his 17th Birthday in 1997, he began performing at The Cyprus Club and was there for over four years up until he graduated from university in 2001 and went on that long overdue overseas trip to Greece and Cyprus. He had the opportunity to meet and play for many talented singers at The Cyprus Club who were invited from both Greece and Cyprus, over his period performing there. Between 2001 and 2002 he was the resident Bouzouki Player at one of the best seafood restaurants in Sydney, The Botany Bay Seafood Restaurant in Brighton Le Sands, entertaining multi-ethnic patrons, echoing the sounds of The Aegean in Botany Bay. In 2003 and at just 23 years old, he was given the responsibility of Music coordinator at the Greek Community Club which he successfully fulfilled for a whole year. In 2004, he was approached to become the resident Bouzouki player at the then popular Megisti Blu Greek nightspot in Belmore. At the end of 2006, Sydney’s premier Bouzoukia “ΝΟΤΕΣ LIVE” opened its doors in Enmore with Tassos invited to take on the lead role as Bouzouki Player. “ΝΟΤΕΣ LIVE” set a new benchmark and was the next best thing after the Bouzoukia in Athens and Thessaloniki. Here he had the opportunity of backing up various great voices from Greece and popular names such as “Mr Kabriole” Giannis Vasiliou and female artist Lizeta Nikolaou.

Tassos Bouzouki has performed with well-known artists from both Greece and Cyprus and is always in demand to perform at numerous functions such as Weddings, Christenings, Birthdays and other special private functions as well as Greek Festivals, Greek society university Balls and Greek Taverna Nights.

One of the highlights of his musical career is performing the Mikis Theodorakis composition with lyrics by Odysseus Elytis “Της Δικαιοσύνης Ήλιε Νοητέ” (Intelligible Sun of Justice) alongside one of the world’s greatest bouzouki players CHRIS OLYMPIOS who was also his bouzouki teacher. This was a SOLD OUT concert held at the City Recital Hall with over 1200 people attending in celebration of Mikis Theodorakis’ 90th Birthday and as part of the Greek Festival Of Sydney in 2015, director and conductor George Ellis and vocalist from Greece Vasilis Lekkas. A year later in 2016 he had the pleasure of performing for popular Greek artist DIMITRIS BASIS as part of the Greek Festival of Sydney, again at the City Recital Hall in Sydney and at the Closing Ceremony with the same at The Grand Roxy.

Another major highlight was performing under the instruction of renowned and award-winning composer, arranger, pianist and musical director THEMOS MEXIS for a tribute concert to the late MANOS HATZIDAKIS in 1995 at The Enmore Theatre. 22 years later in 2017, Tassos was again invited under the instruction of THEMOS MEXIS to perform at a tribute concert for the late GIORGOS ZAMBETAS.

TASSOS’ passion for the Bouzouki and willingness to work towards becoming a live Greek music specialist has granted him the appreciation of well-known musicians both locally and internationally.

Tassos is not only a competent Bouzouki Player & Singer, but also plays traditional Violin at various Greek and Greek-Cypriot Weddings, especially for the dressing of the Bride and Groom.

Tassos Bouzouki has experience with both Traditional and Modern Greek Music and is available for all private functions in Australia, Greece and Cyprus. He is also a one-stop destination for all your Entertainment needs be it Sound & Lighting, DJs, MCs, Videographers, Photographers and Wedding cars.

For Function bookings, Bouzouki lessons and other inquiries regarding Events & Entertainment, please contact TASSOS BOUZOUKI on 0404 035 715 or email 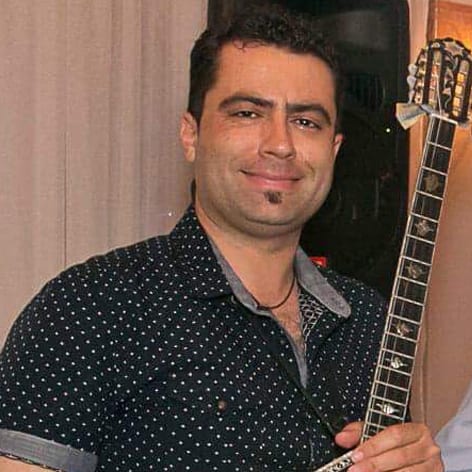