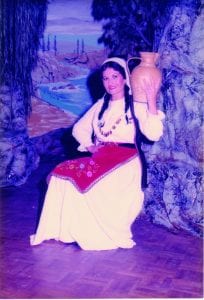 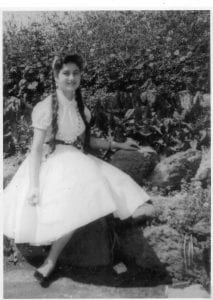 The reason then that we modify the costumes is that we cannot find the proper material. The local material is not woven on a loom. We buy the braid, although it’s not the same as the braid the old women used to embroider in Greece. Of course in Greece today, embroidery is also done by machine, but the material is still woven on a loom. Quite a number of costumes are difficult to make authentically. We try but it’s difficult. That’s why we settle for something that looks similar. We can make the evzone costume and the vraka (island breeches) look the same as the originals, but heavy costumes like the karagouna or the macedonian tou yida are difficult to make in Australia.
Another reason our dance groups wear somewhat simplified costumes is that they have to perform a lot of different Greek dances without changing costumes. This is a practical matter. Many of the Greek associations don’t want us to stop and change costumes according to the dance we are to perform. Even the young dancers don’t like it because it’s tiring. So we make costumes that are suitable for a lot of dances. And then no one can say “you don’t dance the tsamiko with a vraka, or a sousta with an evzone costume”. That’s why we simplify our costumes.
Dance should be taught with feeling. The history of each dance should be explained to the pupils, as well as the correct way of dancing it. Every dance and every costume from each specific place has its own history. For example, in Rhodes the costumes are short and worn with boots which are knee-high because women used to work in the vineyards. It was essential they wore short clothes and boots which would protect them from thorns. Whereas the Simian and the Kastelorizian costumes, the latter in particular, are heavy and embroided because women were the jewel of the house and weren’t allowed to go out, work in the fields or go fishing. For this reason their clothes were heavy, beautiful and distinguished. Their shoes were also like embroided slippers. Every dance and every costume then has its own history and reflects the way of life of the people.
As far as music is concerned, the older boys and girls are not put off by the ‘heavy’ dances because they understand and have a feeling for them. The young ones on the other hand get easily bored with them and for that reason I don’t teach them these dances. I get them to dance to lively music. We also create figures and choreograph. All these things are useful because the dance must look good on stage. But everything must remain within the limits of the dance and not digress from its basic steps and music.
Of course everyone changes something and adds something of themselves. This has always happened. In fact, it is these changes that have made Greek dances beautiful and made them endure for so many years. Gradually, through the ages, our dances have increased in numbers. Initially there weren’t as many dances as today. They all began from the syrtos or the pirichio pithikto (pyrrhic) and now there are over four hundred dances as they say.
Greek children in Australia today feel proud learning Greek dances. They don’t feel ashamed of it. I believe that in our time, Greek dances will continue to be passed on and danced beautifully and authentically. The future depends on the young people who are learning dances today and on those who will become dance teachers in the future. It will also depend on the extent of visits by teachers from Greece.
Generally, I believe that our dances will continue to be danced in the future. The second and third generation will continue to dance for a long time yet, unless of course our contact with Greece stops completely.
I’ve loved Greek dances since I was a child and I pray to God that I live enough years to offer my services to the Greek children of Australia so that we may maintain our beautiful dances and traditional customs. 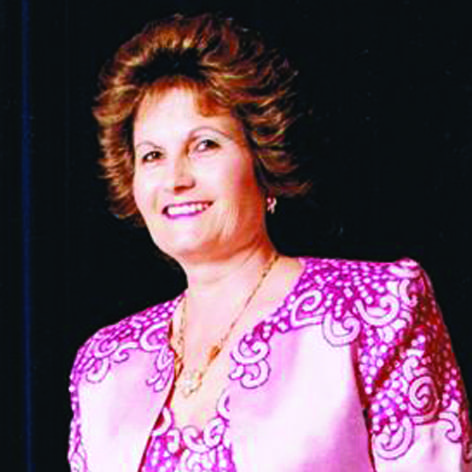