The story of a Greek child immigrant who accomplished the Australian dream.

In 1970, at the age of nine, Peter Katholos arrived on a boat in Sydney Harbour, after thirty turbulent days at sea .He had departed the Greek village of Myrsini with nothing but the blessing of the Gods of the Peloponnese and the clothes on his back.

These days, Peter Katholos, the former Socceroo and self made succesfull businessman ,

Peter Katholos, one of the most talented footballers the Australian game has witnessed which was supported by the legendary Tommy Docherty who described him as “the best young player he had worked with “  and the great Ferenc Puskas  giving him the highest accolade “ the best technique player in Australia “  and the late john warren “ one of the best midfielders Australia has produced “ controlled the ball like a puppet on a string, playing career  20 years 557 games scoring 97 goals for socceroos Sydney Olympic , Marconi , Apia , Melita, St George

but always acknowledged that life after football had to be sweet.

After opening his first sports business while still playing the professional game, Katholos mapped out a risk profile to succeed in the cut throat world of sporting supplies as a retailer, importer and manufacturer, establishing the brand “ cappe “ and completed education in the fields of electronics & telecommunications and building for property development.

Despite his accomplishments, Katholos never forgot his humble beginnings, exemplified by his devotion to communal activity for which he has received several high ranking rewards, including, the Centenary Medal  from the Queen for services to football  and also induction to the Australian Greeks  Sporting Hall of Fame.

He also carried the Olympic torch after Cathy Freeman before the 2004 Athens games handover and was endorsed  by Greek consulate  to lead the Australian team of  eighty  sports people to the Greek elliniada  Games in 2003 Thessaloniki.

Katholos is an icon amongst the one million Australian Greek diaspora and arguably the most respected footballer in the eyes of his peers.

If ever there was to be a revolution in Australian football to allow the former players to take up their rightful place, Katholos, who is not reluctant to express his displeasure of the current power base, would play the role of the Pied Piper to perfection.

Unfortunately, like the playing out of the Greek tragedy, Katholos also realised life can be fragile and often a dark side can emerge which can promote a sense of futility.

Katholos experienced this feeling when he lost his son, Jason, at the tender age of thirteen to a congenital disease.  However, the presence of the 2,000 people at the funeral service was not only a reflection of his high standing in the community but a great source of comfort to his family.

Nevertheless, some people with less character would have buried their head in the sand but his son’s determination to live his short life to the fullest, served as an inspiration for Katholos to make him the success he is today. 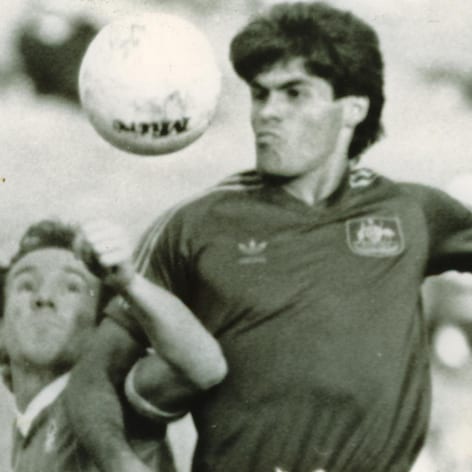