as recorded in “Personal Stories” of St Basil, episode 2


I was born in a village in Lower Egypt, called Desouk. Half an hour from Damanhur and one and a half hours from Alexandria. And about three hours from Cairo. My father had the local coffee shop (kafeneio). My grandfather had a convenience store before my father. All I am saying is that my family had been there before the 1900’s. There I learned my first ABC’s.

I had to attend high school and so I went to Alexandria. I sat for my exams. I’m blowing my own trumpet here, but from all the fellow village kids, I got the highest score. In Alexandria I attended the first grades of high school. That was in 1941 during the WWII.

The Italians and Germans were bombing Alexandria regularly.

One day a bomb exploded near our house. Fortunately nobody was killed.

My father got scared and we moved to El Masura. Another city that also had a Greek high school. In El-Masura I stayed for two years and graduated from the Greek school.

After that I enlisted as a volunteer in Cairo. In those days, when Greece lost the war against the German, Italian and Bulgarian alliance both Greek officers and soldiers were fleeing the country and coming to the Middle East, Palestine, today’s Israel and Cairo.

The Greek army in the Middle East attracted the name “the Greek Mountain Brigade” and in Alexandria was a Naval Base of the Geek fleet.

Unfortunately many Greek ships were sunk however those still operating like the “Averof” came to Alexandria.

After my discharge, I went to seek a job in the Suez Canal, where many Greeks were working with the Greek army. One of my fellow soldiers –lucky him- found work in Abyssinia (Ethiopia) at Addis Ababa , he contacted me and told me “Parascho , they need a radio officer here at Ethiopia Airlines. Why don’t you come?”

Through Cairo, I got my visa and travelled to Abyssinia.

There I spent the best three years of my life working as a paid guide.

It’s a good thing that during my army years I was trained in radio communications by the Air Force. When it was time for me to depart for Greece it was a very emotional moment. My colleagues and I were crying. For me he Egyptians are like Greeks. They treated me so well. I loved them and I still love me to this day. Just as I loved the Abyssinians. They treated me very well too.

I did not know anyone. I was familiar with the Salvation Army from Egypt. I knew that they helped people, so I went there first. They were operating a hostel at that time so I stayed there. I got a newspaper and I read that employees were needed in a restaurant in Summer Hill. I asked myself “where is Summer Hill?”

I had no idea where Summer Hill was.

I asked around. In those days there were places owned by Greeks called “Milk Bars”. I went inside and two Greeks were sitting together having coffee. I approached them and asked “is this place seeking employees?”

They said “yes, how did you find out?”

“I read it in the newspaper and here I am”, I replied. They were from Kythira. Good people. Different kind of people. That’s why I love all the people of Kythira. They treated me very well.

I got married and God made me a father of two daughters. Sadly I don’t see them anymore. One is in Adelaide and the other in Greece. 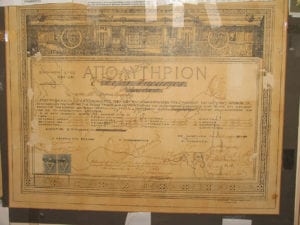 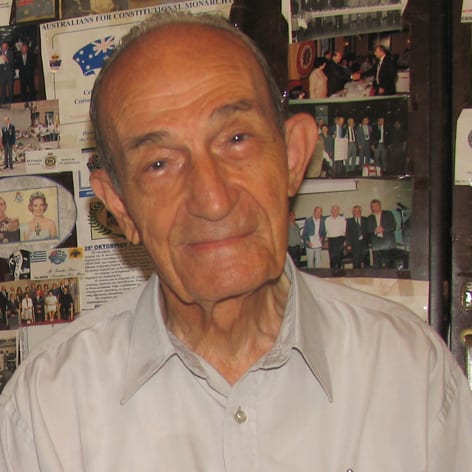