Krazy Kon is an internationally acclaimed DJ, CD series producer and event promoter. He is an innovator, a creator, a legend who has been at the top of his industry for 24 years now and in this time has built an entertainment empire.

As a Dj, Krazy Kon playing clubs and bars of Sydney in late 1994. Since then he has gone onto play 129 gigs across Australia with numerous shows in Melbourne, Adelaide, Darwin, Perth, Brisbane, Townsville, Gold Coast, Canberra & Hobart. On the International stage he has headlined 16 shows with performances across America playing Los Angeles, San Francisco, New York, Chicago, Boston & Tampa.

He has also played 4 shows in Wellington, New Zealand. Krazy Kon has played at all the major Greek Festivals across the country including the Greek Festival of Sydney, Being Greek Festival Sydney, Adelaide Glendi, Brisbane Paniyiri & Darwin Glendi. He has played over 500 gigs in his hometown of Sydney and was the resident weekly DJ in many of the initial Greek bars and clubs that kicked off the Greek scene in those early days including Eclipse, Randevou, Red Martins, Sfinaki Bar, Asteri Bar & Enigma.

As a Producer and from his ideology he has created the iconic GREEK MIX CD Series. Its the biggest selling Greek CD series in Australian history. The series has broken all records and barriers with availability in mainstream music stores such as Sanity, JB Hi Fi, Virgin, Myer & Big W. Everyone has grown up listening to a DJ Krazy Kon CD and so far he has released and incredible 21 albums with his music now available all over the world on iTunes and has the recognition of making 2 ARIA charts an 7 ITunes charts.

His Greece 2016 CD became the first ever Greek CD to make the ARIA Top 20 Compilation Charts and also hit #1 on the iTunes Dance Charts in Ausralia. He currently works with all the major labels in Greece and is known by artists, managers and label bosses who acknowledge DJ Krazy Kon’s work and success in the Greek music industry. He remains the only DJ in the world outside of Greece to have his own CD series and has taken Greek music to another level in this country.

As a Promoter he has hosted over 300 events in Sydney and has led the Greek nightlife movement with innovative concepts at elite venues such as Cruise Bar, Zeta Bar Hilton, Establishment, Basement, Blue Beat and Arthouse. Over the last 7 years he has promoted successful Australian Tours for overseas artists such as Sakis Arseniou, Ilias Vrettos, Konstantinos Koufos, Thanasis Vasilakos, Master Tempo, Knock Out, Vegas, Stavento, Maria Iakovou, Zan Batist, Nikos Ganos, Sarbel & The Kings Of Mykonos with Nick Giannopoulos

Krazy Kon is also a TV presenter appearing on Greek-Australian TV show – Meraki TV every Monday Night with his segment “Music News”. He also is a regular guest host on radio shows across Australia and has appeared in many Greek newspapers & magazine articles across the world media. 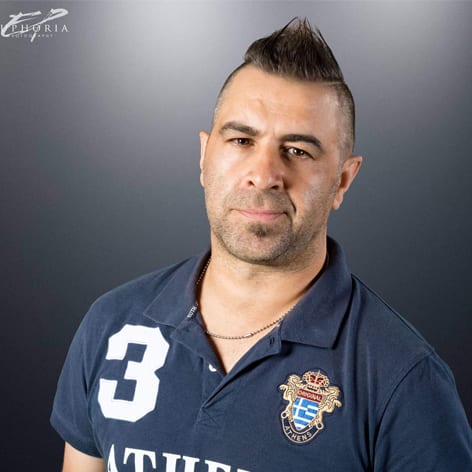