Joan (Euphrosyne) Messaris was born in Sydney in 1953 and passed away in 2004 at the age of 51. Her death devastated her family and left a vacuum in the journalist world of the Greek community of Australia. She was a third generation Greek-Australian, from her father’s (Dennis Pratt – Panaretos) side, as her grandfather arrived in Antipodes at the end of the 19th century. She had served journalism with unsurprising devotion for more than 30 years and at the same time she worked tirelessly for charitable organisations in Australia, Greece and Constantinople, the town her mother, Makrina, was born and who instilled into Joan her love for Greece and everything Greek. Joan apart from perfect English and Greek in both spoken and written form, was just as fluent in French, Indonesian, German and Italian and had a good command of Latin She was the mother of a son, Stathis Geoffrey Messaris.

After finishing the Ascham High School she studied languages and Psychology at the University of Sydney, graduating in 1973. In the same year she got married to George Messaris with whom she worked together in the Media for more than 30 years. In 1974, Joan took her Diploma in Education from the same University.

While Joan was still in high school, she worked during the school holidays at the offices of the newspaper Nea Patrida (New Country) and later at the Indonesian Consulate in Sydney. She taught at St Brigid’s High School in Marrickville for only one year because she found writing a satisfying challenge in which she excelled. Her first steps in journalism were made in 1973. She had her own column titled Young Talk in the Panhellenic Herald. In January 1978 she and her husband resigned on deontological grounds. For about 10 years Joan worked as radio announcer at SBS Radio (2EA), 2SER-FM and other radio stations. In 1982 Joan started writing for the newspaper O Kosmos. She was the editor of the English supplement Young World. In January 2000, she resigned from this role again on deontological grounds. Her articles were also published by the Melbourne newspapers Neos Kosmos and Nea Ellada.

She continued her career with the multilingual advertising agency Ethnic Communications as the Media Relations Manager. At the same time she was translating books, documentaries, film and advertising scripts from Greek into English and was also writing scripts for television programs (SBS and Greek Variety Show, Channel 10). Joan had appeared as a guest in many radio and television programs in Australia, Greece and Cyprus. She was a member of the Australian Journalists’ Association and the Media Entertainment and Arts Alliance.

Joan has worked voluntarily for many charitable organisations because she loved her fellow man. She was very active with organisations like Red Cross, Australian Museum, Church foundations and others. Her role in the establishment of the Department of Modern Greek at the University of New South Wales and Macquarie University was pivotal. Finally, Joan was always present in any fund raising effort.

The poem below was included in the book: Mother, a moving reflection of God

It is a poem by Archbishop Stylianos S. Harkianakis dedicated to the late Joan Messaris

For those In great sorrow you are joy

Service of the Small Paraklesis

Sorrow was not on the program

nobody could foresee it

as long as mother was a shield

in each of our lives

even from the grave.

Mother’s blessing was not only

it had always been preceded

the holocaust of her own body

In the book the History of Greeks in Australia, Josef Vondra writes about Joan Messaris:

Joan Messaris is an Australian-born, active member of the large staff of journalists in the Hellenic Herald: she writes the newspaper’s English page: Joan Messaris’ Young Talk. The paper’s leading political journalist is Lambis Paschalides one of the most astute observers of Australia’s complex political and religious scene.

Joan Messaris has strong opinions on the question of Greek culture and traditions in Australia. As a journalist specialising in articles on the young, she is critical of some Greek traditions still upheld in Australia. ‘The young especially suffer’. she said. ‘Their parents came here twenty or more years ago and have not changed their attitudes since their arrival; they believe the Australian-Greek way of life should be what it was twenty or more years ago.’ An interesting point and she expands: ‘Psychologically, they don’t want to understand that change has taken place in Greece, that things are different. This is very important to them for they sometimes justify their presence in Australia’. It’s a security thing, both in economic as well as emotional terms. ‘But then they go back to the old country and get a shock when they realize just how things have changed. Meanwhile their children suffer…’

Photo: Joan and George Messaris (courtesy of Josef Vondra, from the book The History of Greeks in Australia) 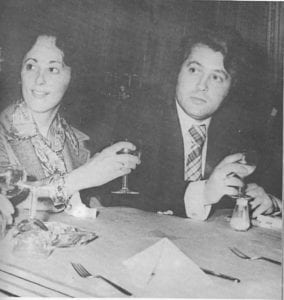 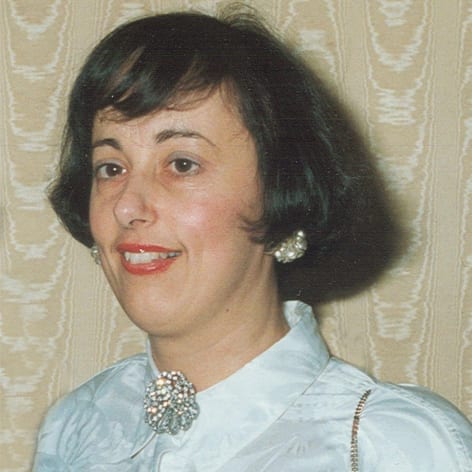