George Raftopoulos By Lee-Ann JoyIf you have ever met or talked to George Raftopoulos, you will know he has been fighting notions of conformity his entire life. Being from the only Greek family in a rural NSW town, George learnt from an early age the virtues of resilience, the value of humour, the resistance to conformity and to never take yourself too seriously.
English
Greek
English

George Raftopoulos was born in Sydney in 1972, the son of Greek parents. His childhood, from the age of five, was spent in the New South Wales town of Grenfell. His parents moved out to buy a fish and chips shop. In the 1970s, the Raftopouloses found themselves to be the only Greek family in the town. Those early years shaped his personality. He had to prove himself, but that made him stronger. Looking back at those years, George believes that it was the best education in his life and the foundation for him to make pictures.

A very defining moment in his life was an accident he had at the age of thirteen. He stayed in hospital for four months. George describes that time in one simple sentence: I went in as a boy, I came out as a man.

He made a conscious decision when he finished high school not to go to University. Instead he decided to go to Greece and find out who his family was, where he was from.

But the prospect of living in Greece was not in his plans. He turned his back to his father’s dreams and came back to Australia to get an education.

George Raftopoulos held his first solo show when he was still in his third year of university at only 20 years of age. He has been exhibiting ever since in Australia and internationally in New York, Hong Kong and Paris.

George Raftopoulos’s paintings are immediate, responsive, intuitive. He is a story-teller. In the manner of Aesop his paintings are modern visual fables and moral lessons; observations on man’s inhumanity to man and the human condition and more prosaically the vicissitudes of the artist, along with musings on politics, philosophy and life.

The migrant experience pervades. George Raftopoulos mines the Greek myths and psyche of his heritage and his experience growing up Greek in a small Australian country town. His DNA is Greek, His nurture is Australian. His way of working is cathartic. It’s about George… his story, his history, his search for identity.

George Raftopoulos has exhibited his work extensively over the last two decades at galleries and institutions including: Bega Valley Regional Gallery, the Greek Embassy in Canberra and the Paris Print Biennial.

Exotic Greek Island beaches, sweeping Australian bush vistas, frenetic New York streetscapes all appear through a visual language that relies heavily on a textured composition of colour, space and line. Raftopoulos’ paintings have developed into sophisticated expressions that command your attention and draw you in for a closer inspection, repeatedly revealing something new with every fresh glance.

This talk was given at a TEDx event using the TED conference format but independently organized by a local community. Learn more at http://ted.com/tedx

I am here to tell you it is time to be brave and to be a warrior. I am a living testament of that. Because through my short life – I am only 44 years of age – I have come up against times in my life where I need to push through fear and I know that everyone of you here today go through that and go through it from time to time. That is called life.

I grew up in a little country town, 4.5 hours from Sydney and we were the only wogs in the village. Therefore being the only wog in the village I had to prove myself. I had to be brave, I had to be fierce. I had to show that I was not afraid. That I was not going to join the pack, that I was indeed an individual. I had a surname this long and I was the odd kid… So what did this teach me? It taught me to have a sense of humour!

It taught me to internalise the fear and to externalise humour and how to push through.

I distinctly remember one occasion when I was in primary school, in Grenfell, and it was an afternoon of drawing pictures. I sat there and I was drawing and drawing and I could hear the teacher saying “ok, stop drawing… time is up”.

Being who I am, I kept drawing because I was in a meditative state, hindsight that is a beautiful thing.

This teacher assumed that I was being facetious, not paying attention

She was so outraged and ripped up my drawing in front of the whole class. The light bulb went off. A ha! I had her attention. Not that I really knew at that point that this was to be my destiny but this is where it began… I knew I could hold people, I knew I could get a reaction out of people and it continues today.

As you can see the work behind me here it shows a warrior. I believe we all have an internal warrior we just have to tap into that warrior. Like that day in Grenfell.

The first day I went to Grenfell these kids came up to me and said “mate do you play rugby league?” I had never played rugby league in my life. I said “yes, sure”.

You know what they did? They had the biggest kid to run at me and I had to tackle that kid.

Guess what I did… I flattened him and that gave me instant respect.

I take that motion, that belief system in everything I do today.

Drawing pictures…. Yes, I create beautiful paintings but I want people to look at those paintings and to think what their life means.. I want to ask you that question. Life is too short…

Another story. When I was thirteen I went through a glass plate door. I  was being groomed to be a great soccer player. And what happened to me? When I went through this glass door I severed all me tendons in my legs and my arms. I remember hearing the doctors saying to my sister – she is a theatre nurse – he may be a paraplegic.

I spent four months in this hospital and I had plaster from the waist down. Because it was such a severe accident I spent the four months and all I did was draw every day. That’s all I did. And it took me to a place, it took me somewhere else. Again I wasn’t fully cognitive of what this meant or how I could utilise this in my life down the track but the signs were there.

All of a sudden, I was starting to see things differently. Because I was forced to…

I have a saying that I went in a boy, I came out of that hospital four months later, a man.

I remember my bedroom… I used to have soccer posters all over my bedroom wall and I would think that when I grow up I was going to be like one of those soccer players… you know play for Western United.

I will never forget when I went home, hobbling in, I ripped all those posters off and all of a sudden my drawings went up and it was like my new reality. This is how I conversed. This is how I found peace in the world. This is how I figured out issues in my head. It didn’t always have the answers but it always gave me something to clarity.

My work is about being true to one self. My work is about dying on that journey. And yes when I go through starting a painting, I start with gusto, I start with no fear whatsoever and then somewhere in the middle I feel like I lose my way and that little voice of fear creeps in and then you know what happens?

I tell it to get out and the way I get rid of that fear is to keep working through it. I confront it and I move on.

Funny enough, another time in my life was when my parents moved back to Greece and they wanted me, the prodigal son, to stay in Greece with them. I said to my father, who is quite a scary looking character, big Grecian moustache, hair like Don King, I looked at him in the eye and I said “Dad, I have to go back to Australia and get a University degree”. He says to me “you are crazy. I will give you everything here.

So I just looked at my father square in the eye and said to him “this is not for me. I am out of here”.

That took a lot of courage and I lived with a lot of guilt for a long time because I forced them back to Australia. But again I have gone back to the art, again I know that’s what’s going to propel me through life. And that’s what I have done. I’ve had a career for 25 years and I paint about my experiences.

I was always afraid of going to the dentist and this is a picture of me going. That reaction is what means the world to me. Sure it is great to get paid for what I do but the ultimate payment for me is that I have that interaction with people. That they too, will find some semblance of truth. Some semblance of being a warrior. That they too can do what I do. I don’t mean painting pictures. I mean about whatever your chosen field is, never to have fear because essentially things work out. And fear is a good thing. Make fear your friend. Plant those seeds and go through them.

I had a very distinguished career in 2003. Every time you would open a magazine or newspaper there was my ugly head starring at you. I was the golden boy of the arts world. I could do no wrong and I was thinking…

Wow!!! For five seconds I took myself very seriously and thought geez, I am good.

But I tell you life has a funny way of kicking you on the back side.

All of a sudden I realised that was not for me. I lost my voice and I lost my way.

and what was really important for me. So find your voice and be fearless. 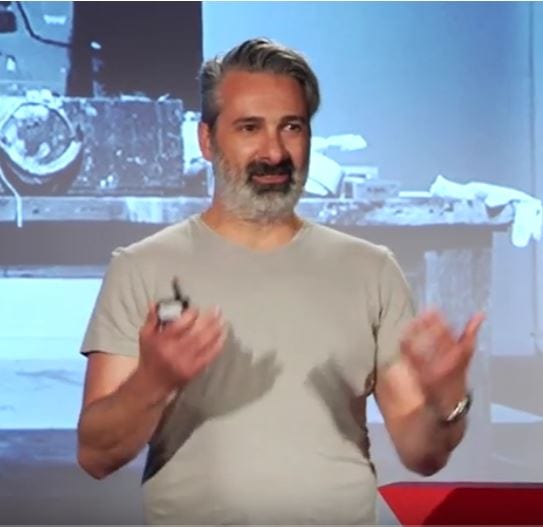