On 3 February 1975, Harkianakis was elected Archbishop of Australia and Exarch of Oceania. He arrived in Sydney on 15 April and was enthroned on 26 April (Saturday of Lazarus). In this role, he engaged in many dialogues between Orthodoxy and other Christian groups, most prominently as co-chairman of the theological dialogue with the Roman Catholic Church, but also as co-chairman of the dialogue with the Anglican churches.
English
Greek
English

God made this land

A loving mother – for sorrowful refugees.

Accepting what the rest of the world rejected

Giving it back to the sun – a newly minted coin

Vast as the ocean

and endless as the Wilderness.

This land resembles the sea

Giving its food – rich yet salty

And returning for each kiss

This was the first poem the late Archbishop Stylianos wrote soon after his arrival in Sydney in April 1975 to take up his new appointment as primate of the Greek Orthodox Church in Australia. The Church had been in Australia, officially since 1924, and in the decades before his arrival, it had struggled to establish itself and meet the growing demands of the Greek settlers who arrived in ever-increasing numbers. His Eminence is warm and personally charming and from the first does not try to hide a certain toughness, a hard-headed view of the spiritual as well as the worldly position of the Greek Orthodox Church. He cuts from English to German to English easily, without effort. Speaking of the Church as a whole, he said: ‘We don’t want to become a global power but at the same time we don’t want to be slack – we want to take a middle course’.
‘I see the Church as a treasury containing the religious and national interests of the Greek people, a treasury which protects and interprets’. (extract from the book “the history of Greeks in Australia” by Josef Vondra)

Stylianos Harkianakis was born in Rethymno on the island of Crete, Greece, on 29 December 1935. He studied theology at the Theological School of Halki on the island of Halki and graduated in 1958. He was ordained a deacon in 1957 and a priest in 1958. He completed postgraduate studies in systematic theology and the philosophy of religion at the University of Bonn in West Germany from 1958 to 1966. His lecturers included Joseph Ratzinger, who later became Pope Benedict XVI. He wrote his thesis on the concept that the Orthodox Church possessed infallibility when it acted together in conciliarity (e.g. the Ecumenical Councils). At that time, the idea of infallibility was thought to be an exclusively Roman Catholic idea, entirely alien to the Orthodox Church.

In 1965, whilst still completing his postgraduate studies, Harkianakis was appointed Professor of Theology at the University of Athens. In 1966, he was appointed abbot of the Holy Patriarchal Monastery of Vlatodon, in Thessaloniki. He was a founding member, then became vice-president and later president, of the Patriarchal Institute of Patristic Studies within the monastery. From 1969 to 1975, he lectured in systematic theology at the University of Thessaloniki.

In 1970, Harkianakis was elected the Titular Metropolitan of Militoupolis (whilst remaining in the Holy Monastery of Vlatadon) as exarch in matters concerning Northern Greece and Mt. Athos.

Archbishop of Australia
On February 3rd 1975, Harkianakis was elected Archbishop of Australia and Exarch of Oceania. He arrived in Sydney on April 15 and was enthroned on April 26 (Saturday of Lazarus). In this role, he engaged in many dialogues between Orthodoxy and other Christian groups, most prominently as co-chairman of the theological dialogue with the Roman Catholic Church, but also as co-chairman of the dialogue with the Anglican churches.

Harkianakis taught Orthodox theology and spirituality at Sydney University since 1975. In 1986 he became the inaugural dean of St Andrew’s Theological College where he also served as Lecturer in Systematic Theology.

Harkianakis died following a lengthy illness in Sydney on 25 March 2019, on the holy day of the Annunciation of the Theotokos.

Awards
In 1973, Harkianakis was awarded the International Award Gottfried von Herder. A noted poet with an extensive bibliography, he was given the Award for Poetry from the Academy of Athens in 1980. In 1985 he received an honorary doctorate from Lublin University, Poland. One of his poems, “After Ephialtes”, was set to music by Costas Tsicaderis. 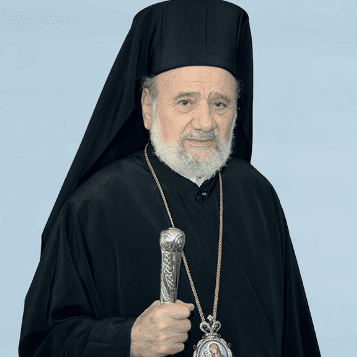