Anna Polyviou started her culinary career in 2000 as an apprentice at The Sofitel Hotel, Melbourne. During this time Anna won the ‘Best Apprentice in Victoria’ competition run by Les Toques Blanc. The prize was a scholarship to work anywhere in the world to further her cooking career.

Anna followed her dreams and worked in London for three years at Claridge’s Hotel; at the time it was regularly awarded the best hotel in England. Anna had the opportunity to work under two extraordinary pastry chefs, Miss Julie Sharp, (UK’s best Pastry Chef, 2004) and Nick Paterson who was awarded the same prize two years later.

Anna continued to enter competitions, many of which she won. She took the top honours with the Nadell Trophy (Dessert of the Year) and also the Culinary Academy Award of Excellence for pastry, which allowed her to travel to Paris to work with renowned Pastry Chef Pierre Herme at Pierre Herme Patisserie.

Anna joined the Shangri-La hotel in Sydney in 2013 and transformed the pastry team. Anna has been the driving force behind the revolution of patisserie in hotels around Australia and her sell-out Dessert Degustation put the Shangri-La on the culinary map in Australia. Anna’s work has been recognised with several culinary awards, including 2018 Hotel Chef of the Year (HM Awards) and 2016 Pastry Chef of the Year (Gault & Millau).

In 2014, Anna hosted one of Australia’s first dessert festivals, ‘Sweet Street’, at which 600 fans downed more than 5000 desserts created by Anna and her pastry friends (including Kirsten Tibballs, N2, Adriano Zumbo, Lux Bite and Tim Clark). Since then, the festival has grown to reach a huge audience and tickets sell out in days.

One of Anna’s trademark dishes, an extraordinarily beautiful modernist take on the traditional Carrot Cake, won 2014 Best Dessert in Australia (Foodservice). Anna was featured on MasterChef Australia with that same dessert and returned in 2015 and 2016 as a Guest Challenge Presenter with her Anna’s Mess and Firecracker desserts.

Anna launched her first cookbook Sweet Street in May 2018, and it sold out within weeks. She continues to work with Kenwood as their ambassador, has collaborated with Matttel on a Barbie ‘Junior Executive Chef’ campaign, presented a series of recipes for Expressi by Aldi Supermarkets, and featured in a campaign for Singapore Tourism.

Anna continues to be in great demand and life doesn’t seem to be slowing down for the Punk Princess of Pastry. 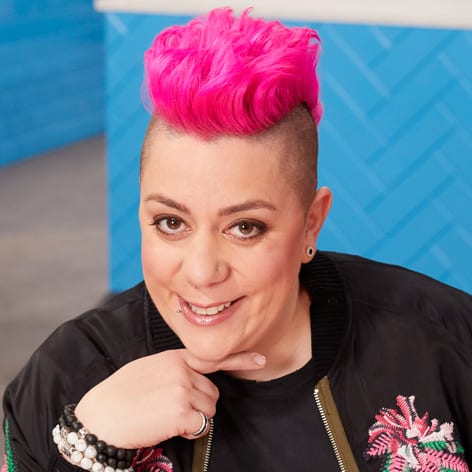